So I’ve been thinking a lot about the way that we as a society currently structure ownership of companies. Specifically about how we decide what to do and what to optimise for at the company level.

So I’ve been thinking a lot about the way that we as a society currently structure ownership of companies. Specifically about how we decide what to do and what to optimise for at the company level.

So, to start off with:

What is a share of a company and what is its purpose?

When you buy a share on the public market, you buy a proportion of a listed company. This means that you own a small piece of that company for eternity or until it declares bankruptcy. During the time that you own the company, the company will work for you and try to reward you. Rewards come from cash in the form of dividends, or from the company making itself look more “attractive” over time so the value of your piece increases and you can realise a cash return by selling it for a higher price to someone else. But why do you deserve this privilege? Why does the company suddenly work for you just because you bought a piece of (digital) paper? How are you adding value to the company and to society at large in such a way that you deserve a return at all?

The original reason for this system of ownership is to reward people who take original risk: entrepreneurs and early stage investors (or later stage investors for follow-on rounds of funding). As a society, it’s important to have a system in place for funding ideas so that when entrepreneurs want to create something cool and useful for everyone, they have access to the cash they need to make it reality. These entrepreneurs and the investors that back them create huge amounts of value for society — by creating new gadgets, better healthcare, and increased efficiency. To make sure that they continue adding value, we need to reward them both. The way we currently reward original investors is to exchange money given to entrepreneurs for a proportion of a company. Once/if the company is successful, the investor is rewarded by selling their share of the company to someone else for a larger amount than they originally invested. This usually happens through a liquidity event such as an IPO or acquisition.

This brings us back to how you are adding value when you buy common stock: What you’re doing is adding liquidity to the trading of shares in that company — you’re rewarding the original investors through a long series of transactions that can be linked to the original investment, thereby rewarding their risk-taking. But this is also the only value that you are adding to this company. There is no other causal link between you buying the shares and the company rewarding you — and the older the company is (or the longer since they did an equity capital raising), the further back in time this causal link stretches and the more tenuous it seems to me.

Profit-motives can have negative side effects

So the goal of our current system is to make sure that good ideas are funded— ultimately to increase our quality of life by growing the economy through increased efficiency and new products & services. We currently do this by rewarding original risk takers by granting them ownership of companies. But this system (like all complex systems) has some unintended side effects.

As mentioned above, companies that are owned by public market shareholders are designed to serve and reward their owners, either by giving them cash dividends or realising capital gains from making the company look “more attractive”. “More attractive” generally means an increase in their expected future cashflows, profits or any other industry-relevant metrics that are correlated with those measures (e.g. number of customers for social media platforms, amount of natural resources for oil & gas or mining companies).

Therefore when companies make decisions, they will optimise for these metrics; increased expected value of future profits and cashflows. Luckily, the outcomes of these decisions are often correlated with socially advantageous outcomes. For example, most of the time, it’s a good thing for society if a company makes a decision that results in…

Unfortunately, there are also many ways in which making decisions to optimise profits will lead to sub-optimal outcomes for society as a whole. I’m sure you can think of many examples yourself of when rent-seeking has resulted in society-level bad outcomes, but here are a few high-level categories of extremely common examples:

So why do we do this? I’m going to explore a partially formed alternative model which I’ve been thinking about. It’s not complete and I’m not convinced that this would actually work in practice, but I think it’s a useful “intuition pump” to help us examine how we have currently decided to shape society and the possible spectrums of alternatives that we have not yet explored.

To value a company from the point of view of a potential owner/investor, you need to project out the expected, probability-weighted future cashflows/profits of the company and discount them back to present value using your own cost of capital. For investors this rate will be their “cost of equity” and should include a risk premium to account for the variance of the projected cashflows /profits. What is interesting about the mathematics behind this is that — due to the exponential effect of discounting — the current value of a company is exponentially less sensitive to changes in cashflows as you move your time horizon further into the future.

The figure below shows the present value of yearly cashflows, starting at $100 today and growing at 2% annually, discounted at 10%/year. The bar labelled “Terminal value” represents the present value of all cashflows after year 40 to eternity. As you can see, the present value of an eternity of growing cashflows starting in 40 years (at year 41 the yearly cashflow is $220, more than twice that in year 0 and still growing at 2% annually) is worth about the same today as a one-time payment of $115 dollars in 7 years’ time. I think this more than anything illustrates how ingrained short term thinking is in the mathematics of our current financial system. 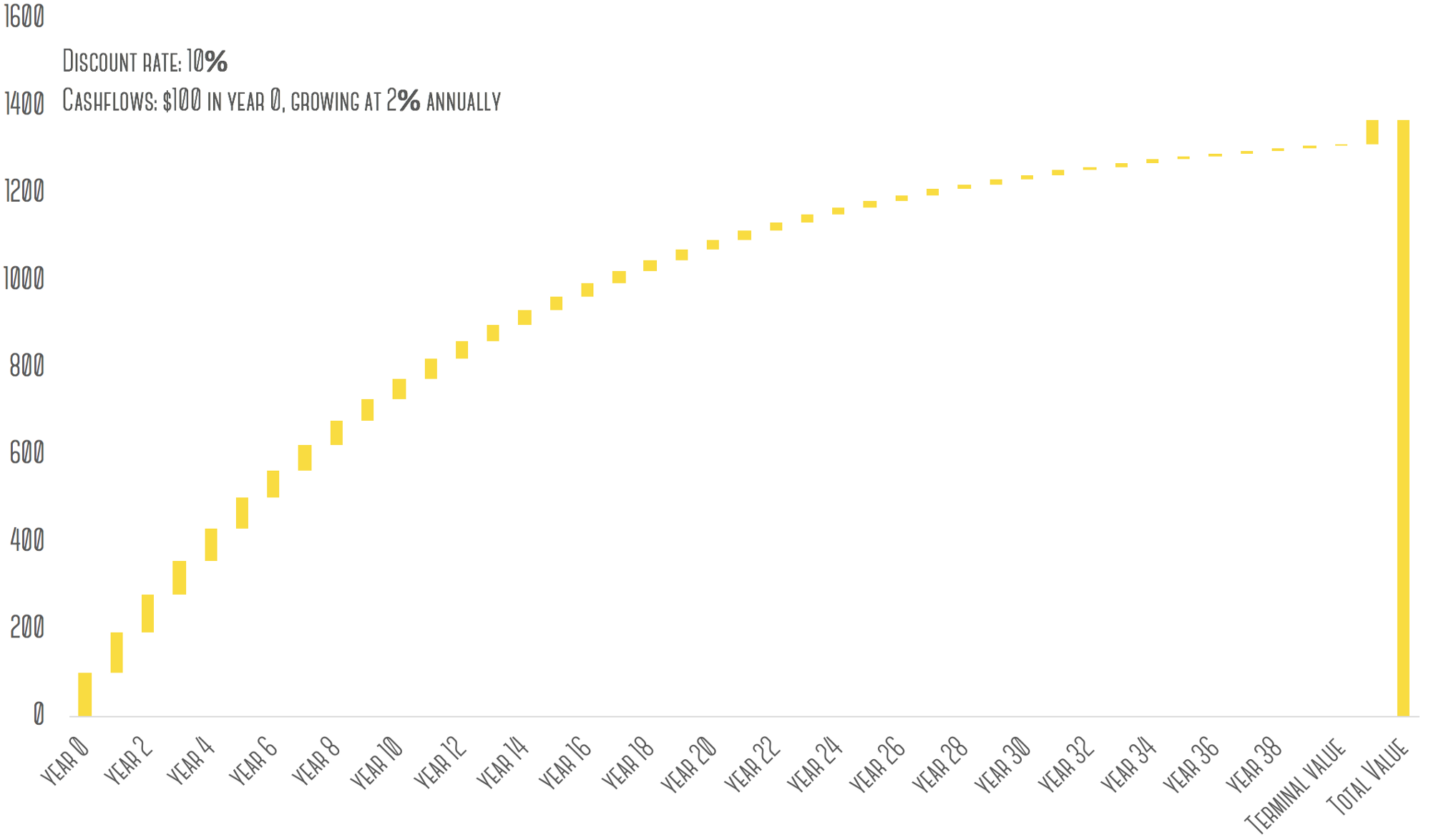 Another way of presenting the same information above is: your decision to invest in a company should be 95% based on what you expect the company to do within the next 40 years. Any changes you expect to occur after that time horizon will have a nearly negligible impact on your current valuation of the company. This is interesting. This means means that an original risk taker’s decision to invest in a company shouldn’t be particularly affected by what happens after 40 years either. This is especially true if you take into account a risk-weighted view of future cashflows for early stage companies. Since most new companies fail, one should on a probability basis reduce the expected future cashflows even further.

So, in conclusion: we don’t need to provide perpetual ownership as a reward to risk takers — their decision to invest in a company will be basically unchanged (+/- 10%) even if they are only granted ownership for 40–50 years!

So we make shares expire after 40 years — what then? Who should own companies after that?

Tl;Dr: I don’t know, but the possibility seems worth thinking about.

Make no mistake—expiring shares is effectively a wealth transfer. If we transferred the value of all listed companies to another entity tomorrow, this would be the largest wealth transfer to have happened in all of human history, by a wide margin. But what is interesting is that according to the reasoning in the sections above, this wealth transfer could be made to occur in such a way that the distortion to the market of original risk is surprisingly small. This lets us reconsider how we should build our financial system’s incentive structures to benefit all of humanity rather than to optimize arbitrarily for cashflows and profits.

I think capitalism is an amazing system and it has taken us incredibly far — we have literally doubled our life expectancy in the last 200 years and achieved scientific and humanitarian advances that would have been unimaginable even 50 years ago. And capitalism essentially has the same strengths and underlying mechanism as the system that created us biologically: evolution. But it also has the same weakness: it optimizes blindly to enable its offspring to survive — and for companies this is means that it often optimizes for economic profit.

The problem with running our companies to optimize for profit is not only the individual, large scale ethical violations that get covered in the media from time to time, but rather the systemic slight shift in priorities in a way that is not necessarily the best outcome for humanity (although granted, it often is). Decisions are made inside companies that are not in any way unethical, but their purpose is to increase company profits rather than increase human happiness, create a sense of belonging and impart meaning. In aggregate, all of these decisions may not help us achieve any of the last three outcomes at all.

So if not public shareholders, who should we transfer this astronomical amount of wealth to? I don’t know. Maybe the government? Maybe some sort of charitable trust? Maybe instead of a transfer, the shares contain an option to extend ownership in return for an additional capital injection into the company or a tax payment to the government (effectively a tax on capital)? Maybe companies should just be liquidated every ~40 years and started from scratch — maybe that’s what is needed for some of our more stagnated and mature industries to innovate. Either way, we have as a society relatively arbitrarily decided that share ownership is perpetual — I think we should examine this assumption more closely.

I find this idea very intellectually interesting, but it has some large of flaws and holes which require more thought to close. A few include: