Let’s stop pretending. Automation will annihilate jobs and this is goddamn fantastic!

I’ve been seeing a lot of op-ed type articles recently about how automation will not have a net negative impact on jobs, but may actually create more of them. See here, here and here.

In the long term, this is ridiculous. It all boils down to the fundamental economic equation: supply equals demand. Another way of saying this is: we must consume as much as we produce.

In the equation below, Consumption is the average amount consumed directly and indirectly per person in the economy per year — i.e. approximately equivalent to GDP per capita. Productivity is the amount of output produced per unit of human labour time. Worktime is the average amount of time worked per person per year. Consumption and output can be thought of as measured in dollars ($), but to avoid having to think about the effects of inflation, it is easier to think of them in terms of tangible products such as milk or rice.

Basic economics teaches us that this equation must balance (globally, on average) if we include all types of consumption including waste and Sisyphean consumption (e.g. paying people to dig holes and fill them up again).

Example: 100 cars are produced in one year, but people only buy 90 of them. The remaining 10 cars will either be stored until next year when fewer cars are produced or more are sold, thrown away (waste), or bought by the government and then thrown away or sold at below cost (Sisyphean consumption — commonly done through agricultural subsidies throughout the developed world). Either way, all the cars will be consumed and therefore cost society in some way. 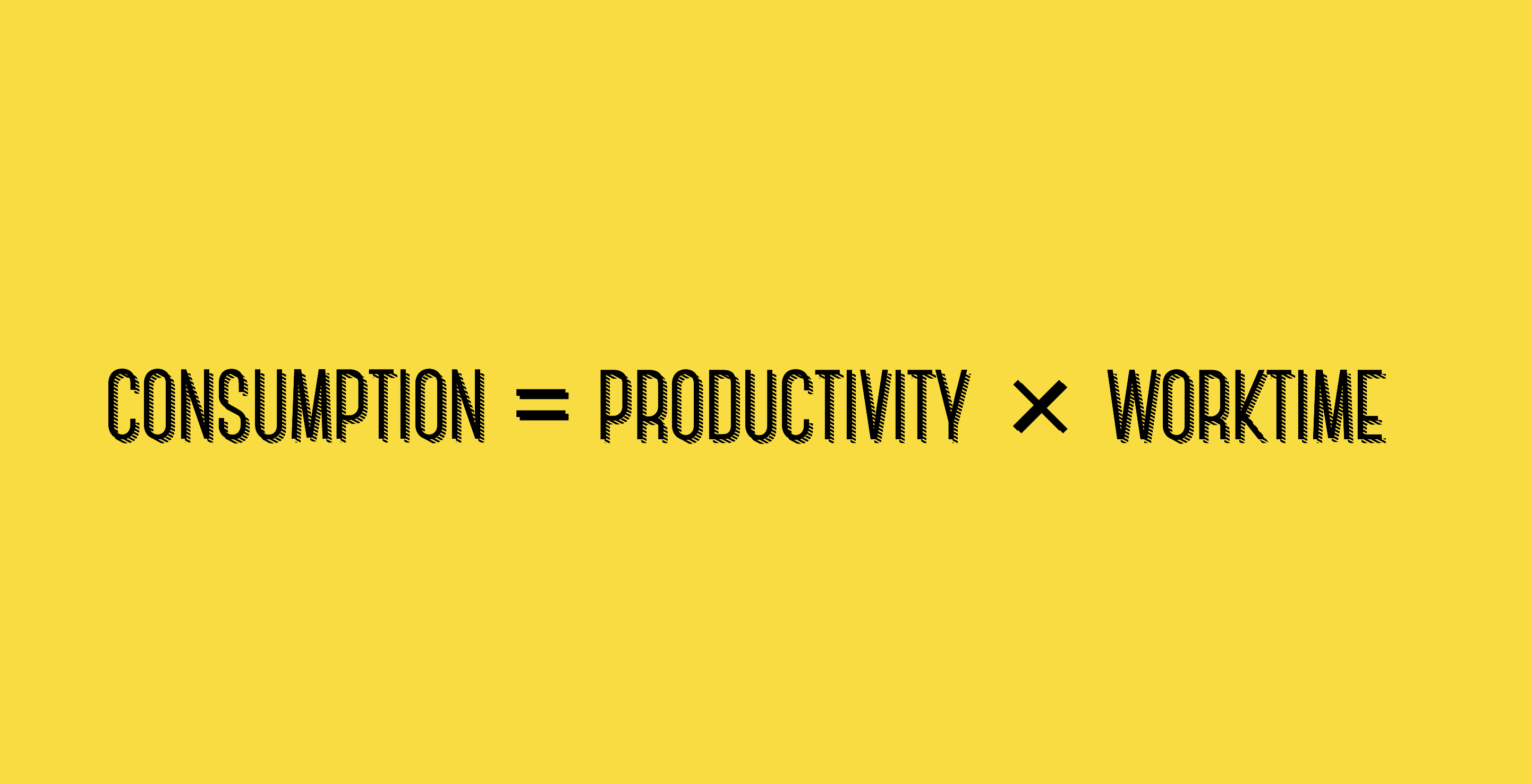 So let’s use this to see how automation will impact the economy.

Note that if only one of these occurs, the shift needs to be exactly equal/opposite to the productivity increase.

So to offset productivity increases from automation, we either need to increase our consumption by the same amount or decrease the amount of time we work by at least some amount.

Fundamentally, there are three ways to increase economic consumption:

In the long term, the last factor becomes the most important, as the other two have natural limits at some point from diminishing marginal utility. So in the long term, to keep production equal to consumption and avoid decreases in average time worked, we need to invent new products for people to buy at exactly the same rate as we increase productivity through automation. This is unlikely because the rate at which we are automating jobs is accelerating while the new products we are creating are incredibly lean in terms of human employment. The new product Facebook produces USD$1.2m worth of value/revenue per employee compared to old product Wal Mart which produces USD$220k of revenue per employee (as at 2017).

Fundamentally, the creator of jobs is innovation and the destroyer of jobs is automation — there is no natural reason that these two should balance each other out exactly.

This means that increasing automation will have to lead to at least some reduction in worktime (average time worked per person per year). There are a few ways to do this. 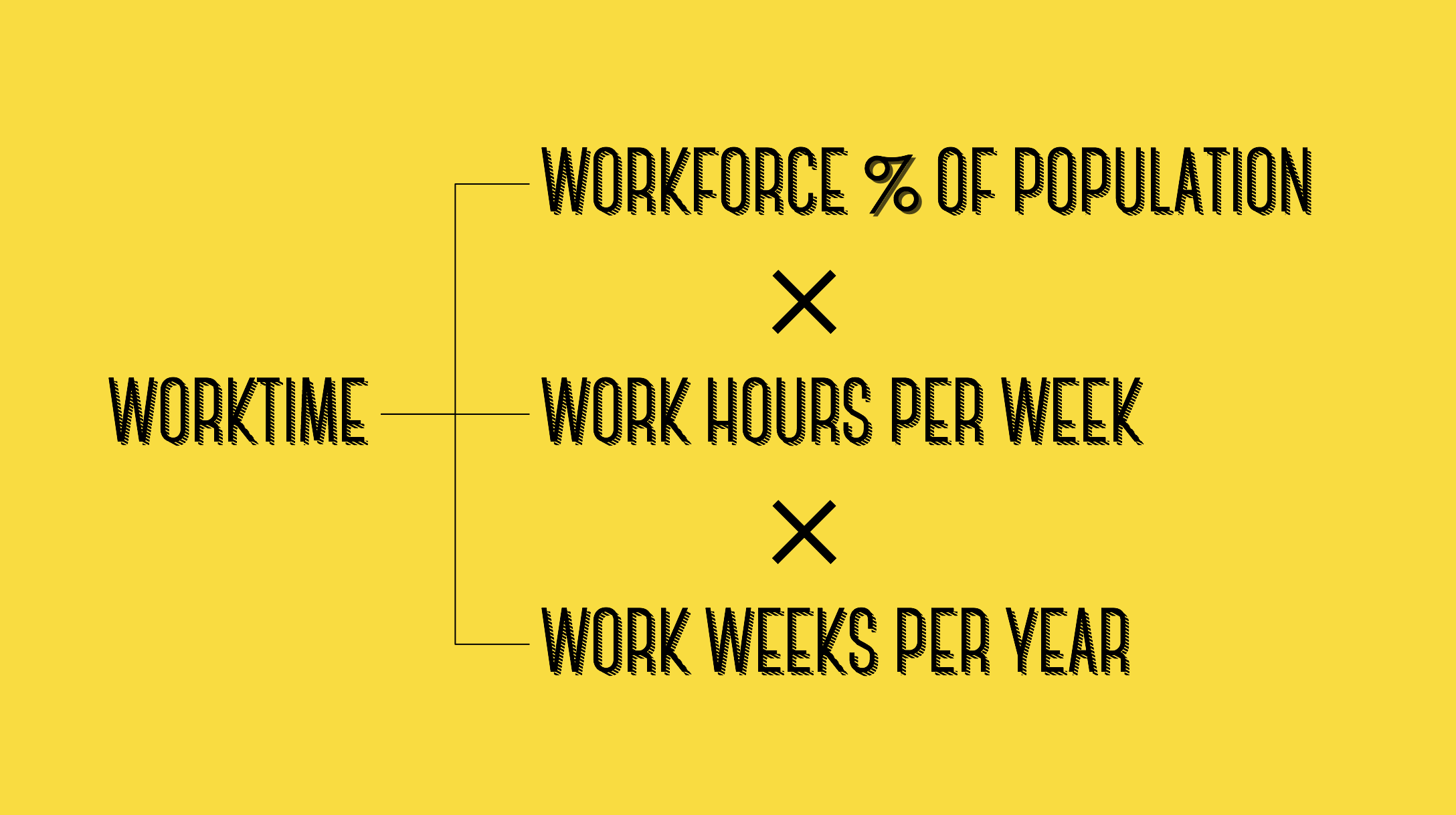 Historically, we have “soaked up” a lot of the productivity increases with the first of these factors: the proportion of people in the workforce. Although a large percentage of the world’s women have joined the workforce in the last 100 years, this has been heavily offset by extending the time spent in childhood and education before starting work and the time spent in retirement. The increasing complexity of society has led to many of us spending 18-25 years in childhood and education before entering the full time workforce. And as we continue to increase lifespans, the proportion of our lives spent not working after retirement continues to increase. In Sweden, the average lifespan is around 82 years, with a retirement age of 65 years. If you include a Bachelor’s degree in an average career path (which is becoming increasingly necessary as automation eliminates less specialised jobs), the average Swedish person may only actually work for 50% of their lives.

We will probably continue to use this driver in the future. As the remaining jobs become more complex, extended and on-going education will be required. The amount of jobs available could be increased by 30% if they become complicated enough to require us to spend 30% of our time in education on an on-going basis. However, increased education levels will likely also lead to an increase in the number of people who can seek out ways to automate. This will further accelerate automation and loss of worktime.

This brings us to my preferred way of dealing with the downward pressure on worktime: decrease the hours we work per week and the number of work weeks per year. We can implement additional mandatory weeks of holidays each year. Then start decreasing the number of hours that people work in a week — increasing the prevalence of job sharing and part-time models of working. It is important to note that if we chose to not touch these two levers, we will indirectly, but automatically, impact the first lever by reducing the amount of traditional jobs available in the economy, forcing people into unemployment.

In many industries I think this will still be necessary. As we automate away manual jobs in manufacturing (through robotics), driving (through self-driving cars) and customer service (through AI chat bots and self-checkouts), these will be replaced by complex and technical jobs. Although some truck drivers will be able to re-educate and become software engineers, it’s unlikely that they will all want to or be able to. And even if they all did, it’s questionable whether 100 truck-drivers-turned-software-engineers would be able to share the 20 software engineering jobs that they are replaced by and still write efficient code while working on a 20% part-time model.

This brings us at last to:

Why this is a great thing

As a society, we are collectively speeding down the highway, heading rapidly towards a highly-automated society with massively reduced worktime. No matter the time it takes until we get there, we will eventually have to face the question: how do we structure society when humans are no longer needed for production?

So far, we have only faced this question partially, i.e: what do we do when we don’t have to work all day every day to satisfy our basic needs and wants? Our answer so far has been quite egalitarian. We have decreased the hours of work per week for everyone to ~40, increased the years we can spend in education and self-exploration before our careers begin and increased the years we can spend relaxing and enjoying the fruits of our labour when our careers end in retirement. We have also continued to increase the proportion of the population that don’t work for other reasons, including disabilities, mental health issues and chronic illnesses. If you think about it, the fact that our society’s productivity has increased substantially and we decided to spend that collective wealth by distributing it is fantastic and a great sign for the future.

But this is where we need to take an additional step. So far, we have distributed wealth quite equally in terms of time, but not in terms of money or resources. Nearly everyone has the right to retire at 65, but everyone does not have the right to the same pension pay-outs. Instead, the size of a person’s pay-outs are generally correlated with their lifetime economic output. So what do we do when some people have near infinite economic output (i.e. have one of the very few remaining jobs) and all others have an output of zero?

I believe that we need to drop this correlation and give everyone wealth equally or as they need it. This may sound like a very radical idea now, but I honestly cannot see how this isn’t inevitable in the long term if we want to maintain a functioning society.

This means that we need to start understanding how to structure society when we don’t have to work anymore and just get a pay-check from the government to buy stuff produced for us by robots. We are approaching a stage in humanity’s history where we each have to stare directly into the existential void that near-infinite prosperity and lifespan reveals: what is your purpose here? If you don’t have to work anymore and you can live forever, what do you do with your life?

This is the not type of question that is addressed by sticking our heads in the sand and pretending that more jobs are going to be created from automation or that death is what imparts meaning to life. This is the type of question that requires deep introspection and meditation on the nature of existence. What do we want to feel and accomplish in life? Who do we want to connect with? How do we want to connect with them? What personal work do we have to do ourselves to face our objective meaninglessness and out of that create purpose?

So let's automate production — maybe then we will finally start focusing on the questions that really mater.