Will 5G fry your brain in its skull like a mushy grey burrito?

I’ve been seeing a lot of articles and videos that are fundamentally misrepresenting what 5G is and often scaremongering to consumers. I’m going to try to explain what 5G actually is here.

5G is a protocol, not a frequency

5G is a set of standards that define how telecommunications companies can send and receive data between masts and phones or other radio equipment. The most important part of this standard is the 5G protocol. It is essentially a program or algorithm that takes data and turns it into radio waves.

The 5G protocol is special in two main ways:

These points are the most commonly misunderstood by journalists and tech people. Point 1. means that 5G can be deployed on existing 4G frequencies (which you are probably currently using to read this article) – we know that these aren’t dangerous at the power levels that we use them at. If you don’t believe this then please bring it up with the WHO. Point 2. means that 5G can actually be deployed at a lower power than 4G on the same frequency. Not only is 5G in itself safe, it is actually “safer” than 4G in these cases (not that 4G isn’t safe).

This band is low frequency which means it has very good range because it propagates through solids easily and at low power (like the frequencies you use to listen to the radio). This makes it very attractive for TelCos and they will pay a lot of money for even just a small amount of it because it allows them to have only a few masts serving a very large area. Because there is not much spectrum available (the ”pipe” is small, only ~40 MHz of frequencies), data carrying capacity is limited. This band is what will give you reception in the mountains but it is not going to give you the crazy high download speeds.

This band is slightly higher frequency than most current 4G bands (the highest frequency 4G band is 2600MHz in most countries), and contains a lot of spectrum (400MHz worth of frequencies). Due to its higher frequency, this band has slightly worse range and penetration of solids. Since it has so much spectrum/bandwidth, this is the band that will be deployed in high-density areas where the range is not an issue and people want super high download speeds. Think city centres, train stations, office skyscrapers etc. Again, power levels are not going to be higher than for 4G and the frequency is not so different to current 4G bands.

If you have a modern wi-fi router in your home, it probably uses 5GHz which is even higher frequency than this band!

This is the band that I’ve seen countless people think will be the main 5G band. It won’t be.

This band is much higher frequency and therefore has a vastly lower range — it can barely penetrate glass windows and even in open air has a range of only a few hundred meters. It does have a huge amount of spectrum (2000MHz), but given how small range it operates over it’s honestly quite a useless band — most operators buy some licenses to it but don’t expect to use it very much, at least not in the next 5–10 years. I expect this band to only be used in super specific situations: maybe in factories or manufacturing plants by robots, or by point-to-point connections such as microwave dishes to connect buildings that are close to each other instead of using fiberoptic cables.

So what’s this talk about microwaves, radiation, cancer and frying brains?

Most of the scaremongering articles I’ve read are worried about three main things:

I’ll go through each of these in turn:

For radio waves/light, the higher the frequency of the radio wave, the higher the energy carried by the photons. This is mainly a problem when it comes to ionization — the process of a photon being able to detach an electron from a molecule or atom. We know that ionizing radiation can cause cancer due to it harming our cells (this is why you get skin cancer from UV light). The thing is that ionizing radiation frequencies start at about 300THz — that’s one hundred thousand times higher frequency than the highest frequency used by TelCos today and ten thousand times higher than the highest frequency that may be used by 5G (the 26–28GHz band). In fact, the entire spectrum of visible light lies in between all mobile frequencies and ionizing radiation. You would be able to see mobile masts glowing before you would get cancer through ionization from them. 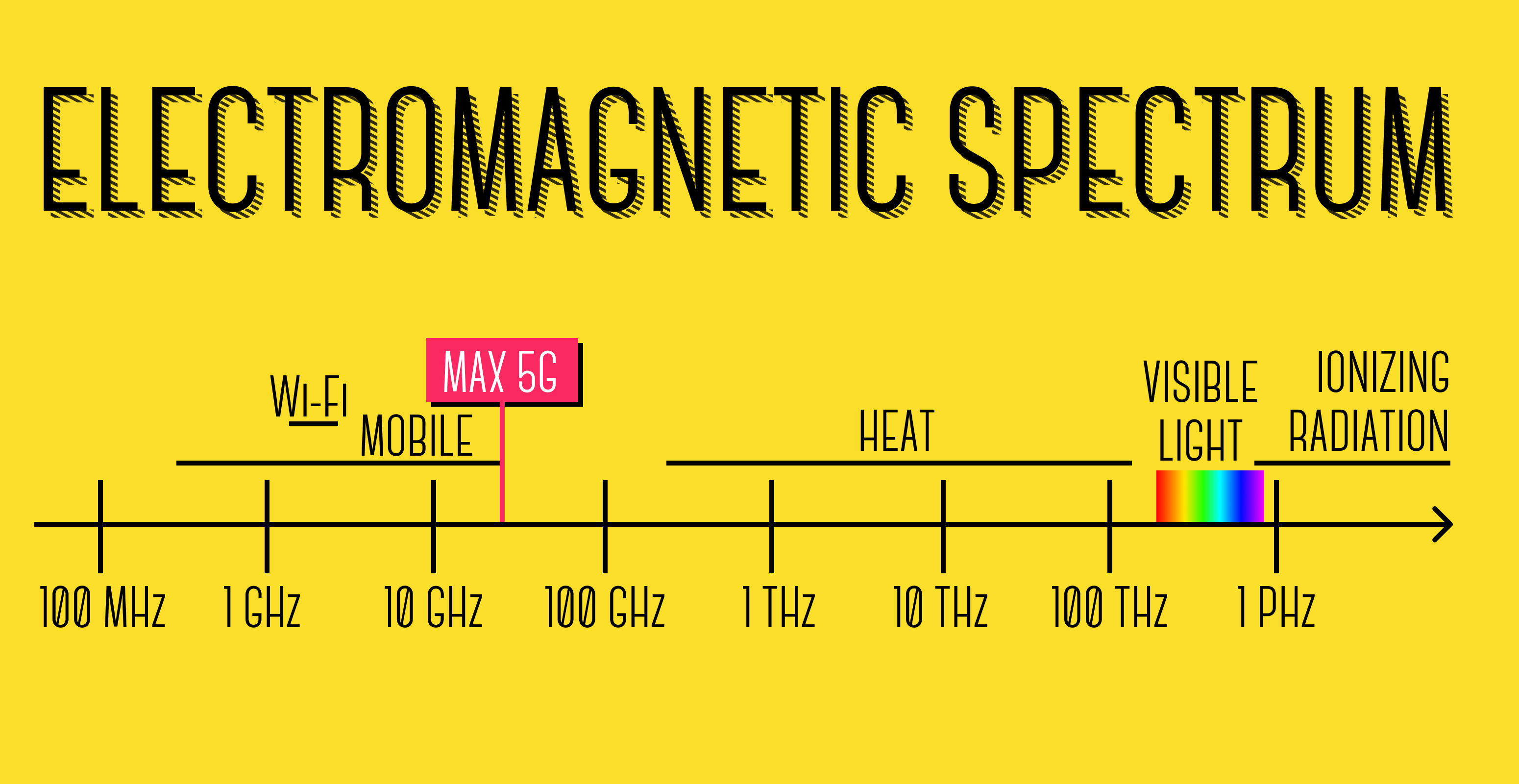 There are other ways to get harmed by radiation at lower frequencies than ionizing radiation. One way is to get burned internally — for example you could do this by putting your hand in a microwave while it’s on. Microwaves actually use 2450MHz to heat your food — this is the also the frequency used by slightly older wi-fi routers. The key difference between your wifi router or mobile mast and your microwave is the amount of power behind the radiation. We have strict rules and regulations that stop mobile masts, phones and routers from burning us. These rules are actually very conservative and will not be changing due to 5G.

A good way to prove that the power limit rules we have in place right now are well below harmful levels is to compare cancer rates between different countries. Switzerland and Italy both have maximum exposure limits that are 10 to 100 times lower than those of neighbouring countries. There are no significant differences in cancer rates here (in fact, I tested the difference between the EU country groups listed here using these cancer rates and actually found a higher avg. cancer rate in countries which have stricter limits on exposure).

This one has been blown out of proportion due to people believing that 5G is the same as the 26–28GHz band, which has terrible range. If everyone was using this band only, Telcos would need to put mobile masts in every room of everyones house, because as mentioned, these frequencies can’t even penetrate glass windows.

However, even though 5G will be deployed mostly on 3400–3800MHz and 700–800MHz bands (and old 4G bands eventually) which have similar or better range as 4G bands, there will likely be an increase in the number of masts needed in the future. But this is not because of 5G. This is because we keep using more data.

Even if we put a halt to 5G tomorrow and kept going with only 4G, Telcos would have to start building more masts to keep up with the increasing amount of streaming, downloading and video chatting that we are doing on our phones and laptops via the mobile network. In fact, if we stop 5G, Telco’s will have to build out far far more masts than they will have to with 5G because 4G is way less efficient. I helped write a report on this which showed that if limited to 4G only, by 2025 Telcos would have to build 2.5times as many masts as they have today.